Collection Note No. One

It is planned to publish a semi-regular series of Collection Notes tracing the development of the Snowy Scheme Museum's collection. These will highlight the diversity of the collection and its representation of the range of experiences of people living and working on the Snowy Scheme.

This, the first in the series, will look at the Museum's foundation collection and at three of the more recent acquisitions.

The Snowy Scheme Historical Collection commenced in 2002 with the purchase of eight large machinery items, including TD24 and BTD6 bulldozers, a Le Tourneau scraper, a Harman face shovel, an Albion Tipper, a man-haul bus trailer, a tunnel testing dome plug and a V-shaped snow plough. Since then, guided by a commitment to document the history of the Snowy Mountains Hydro-Electric Scheme, the collection has grown to include historic vehicles, laboratory equipment, surveying and drafting equipment, artworks, photographs, maps, plans, paper records, books, pamphlets, photographs, newsletters, small tools and equipment, precision instruments, medical equipment, domestic items and much more. 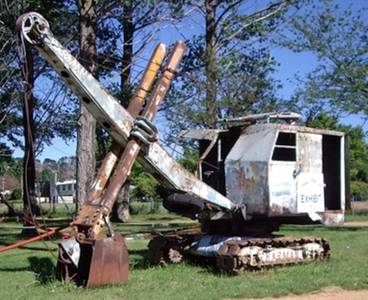 The Harman face-shovel is one of the foundation acquisitions. It has approximate dimensions of 9 metres x 4 metres x 5 metres high and is missing the engine. Its date of manufacture is unknown at this stage, but it is crudely made with very few concessions to safe work conditions. For example, the operator is positioned next to uncovered moving gears.

The face shovel was purchased by the Kennedy brothers - twins Cliff and Max - from Heggie's Transport of Queanbeyan. Heggie's had been supplying sand to the Department of Main Roads for the re-construction of roads in the Snowy Mountains. The shovel worked on-site near the top of Bullock Hill, north of Kiandra and also at Bolairo near Adaminaby. The upgrading of existing roads and the building of new roads and tracks was an important part of the Snowy Mountains Scheme.

The Kennedy brothers started contract work with the Authority in 1950 and were typical of the many small-scale earthmoving contractors who found work on different parts of the Snowy Mountains Scheme. They were engaged on a wide-variety of tasks including road-making, tunnel work and cleaning up the building sites in 'old' Adaminaby.

The Harman is currently on display between the Central and West galleries. 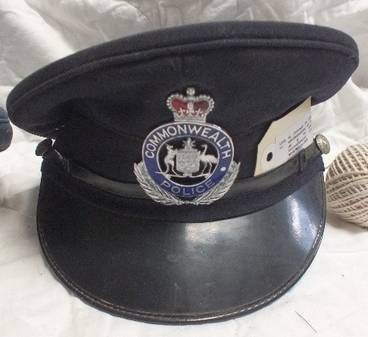 The largest collection accepted in 2021 is the extensive Frank Rodwell Collection that includes personal memorabilia from Frank's work on the Snowy Scheme.

Frank Rodwell joined the Snowy Mountains Hydro-electric Authority in 1955, as a labourer in the Field Construction Division. The following year he was appointed a Patrol Officer in the Authority's Protective Services Branch and was sworn in as a special officer in the Commonwealth Police Force. He continued in security work until 1983 when he transferred to the Property Management Branch. Frank retired in 1990 but continued his association with the Scheme by escorting Snowy Mountains Engineering Corporation VIPs and tourists on conducted tours. Frank Rodwell passed away on 26 December 2019

A selection from the Frank Rodwell Collection will be placed on display in the near future. 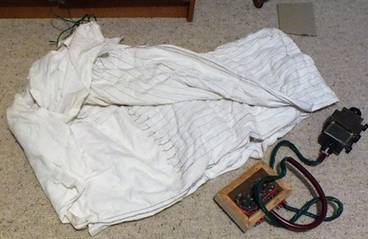 The Museum's collection also includes objects reflecting different aspects of domestic life on the Scheme. One of those items is a home-made electric blanket.

To help workers and their families cope with the extreme cold of winter, a group of engineers designed a home-made electric blanket that could be placed over the top of a bed mattress. The design used an earth screened, step down transformer, with multiple taps to enable the heating rate to be selected with a multiway switch. The cost was very small and a bulk purchase was made for the transformers and equipment. The nichrome wire was reeled off from a large spool and instructions were provided for twisting up the multi-wire heating cables using a twist drill. Flexible wire meant for motor vehicle was used for busbars.

In the Broadbent household Betty ran seams down a double layer of sheeting to make pockets for the heating cables. Henry put the blanket to work before the switches were wired up. Betty remembers him leaning over the side of the bed to change voltage by untwisting a bare wire end from a transformer terminal to connect to another to adjust the heating. The blanket worked well for the Broadbents and was used for many years. It did need occasional maintenance, usually resoldering contacts of the cable ends to the busbars.

Henry Broadbent worked as an electrical engineer in the design office from 1957 to 1963. Betty Broadbent (neé Thompson) worked in Public Relations and was editor of the Snowy Review from 1962 to 1963.

The blanket is currently on display in the Central Gallery. 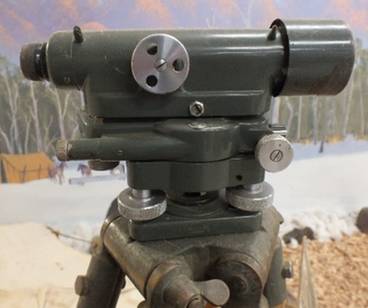 Land surveying instruments in the collection include levels, leveling staves, steel bands, a base plate for a Wild theodolite, a set of Wild survey targets and plumb bobs. None have a known work history but they are typical of the survey equipment used on the Snowy Scheme. Some are displayed in East Gallery.

We would like to expand the survey collection by adding more instruments with a known Snowy Scheme work history. 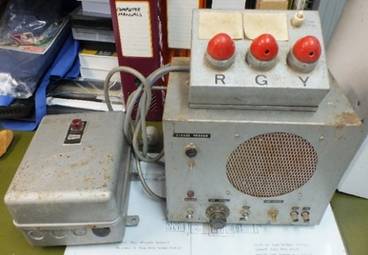 From time-to-time we receive objects that we do not recognise or that come without a known Snowy Scheme story. This Collection Note's mystery object is pictured here. Any advice on the use of this control device would be greatly appreciated.

If you would like to help document the collection, including with 'hands-on' assistance, please email Denis Shephard or the Snowy Scheme Museum, or leave a message with the museum on 02 6454 1643.